So a friend of mine was making a sign made up of 14 inch letters cut from steel plate. He needed to draw the letters on the plate and then cut them out with a plasma cutter. After some thought I figured out that I could probably draw them on the plate steel using my CNC router with a pen attached. I rigged up a marker on it and we got it done. But there were a few issues. The steel plate wasn’t always exactly level. As the pen moved to a slightly higher area on the plate it would become stressed and be bent. This destroyed the felt tip on the marker. Then as it entered areas where the plate was lower, the marker would come off the metal and not draw a line there. We were constantly adjusting our Z axis home and trying to cut at a 0.01 depth. It was a real pain and we went through several markers but we got it done.

So I knew there had to be a better way. I researched around on the internet and found several solutions. The commercial ones a little too pricey for me and I wanted it now. So I gathered up some stuff I had laying around here and put together my own CNC pen holder. 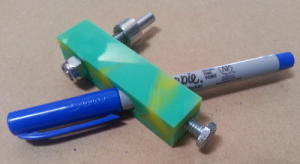 The following parts were used:

The following tools were required: 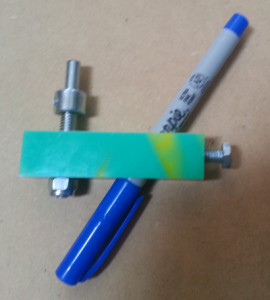 I then put the 1 1/2″ bolt in a vice and used my hand grinder to cut the head off. Then I put on the Nylock lock nut. That was then put into the 1/4″ hole in the block. On the top side I slid on the spring and then the collar. The collar was pushed down on the spring to leave enough bolt shaft left to insert into the router and then the collar was locked down with an allen wrench.

Then I just inserted a fine-point Sharpie pen and put the 1″ bolt in hand tight to hold the pen in. An important note here: The tip of the pen must line up exactly with the center of the router shaft bolt! If you don’t do this then it will not work. If it is lined up then you don’t need to worry about locking down the router shaft. If it turns it will not make any difference.